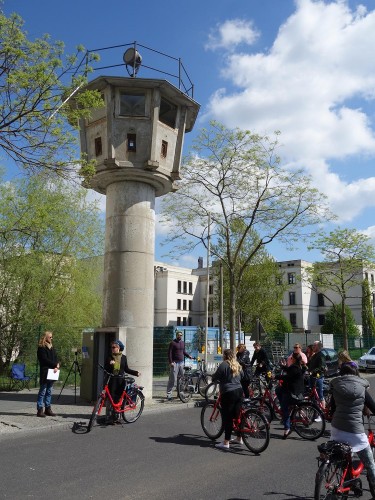 The German government wishes to build a bureaucratic office in the location of the GDR border watchtower at Erna-Berger-Straße. The last of over 300 watchtowers of its kind is scheduled to be demolished. We wish to prevent this.

The border tower at Potsdamer Platz is the oldest relic of the Berlin Wall. It is the sole surviving tower of the first production model, made of concrete. We took possession of the tower from the state in 2011 in a private initiative, restoring it to its original state. The GDR tower developed into a highlight of the Berlin tourism scene. Potsdamer and Leipziger Platz are enriched by this monument of international standing.

The experience of climbing to the tower’s pulpit was one of physical history, a moving journey back to the time of the Cold War. The tower will disappear, a construction site appearing in its place. We do not want this. It must stand free at Leipziger Platz.

The first watchtowers were made of wood, offering little to no protections. From 1966 onward, towers would be constructed from concrete pieces, with a round central column and a pulpit. Later, command and leadership posts with square floor plans were constructed – two of these have survived.

The watchtower BT6 on Erna-Berger-Straße is made of six rings, and was constructed in 1971. Its field of fire stretched into the Tiergarten, towards the Brandenburg Gate. It was manned by two border guards at all times, who were given strict orders to shoot on sight. Later, this tower would also be used to watch the grounds of the Ministries’ House. Over 200 of these towers were build along the Berlin Wall – this is the last of its kind to survive.

The tower was made a protected monument in 2001. Thereafter, it was largely forgotten, and fell into disrepair. 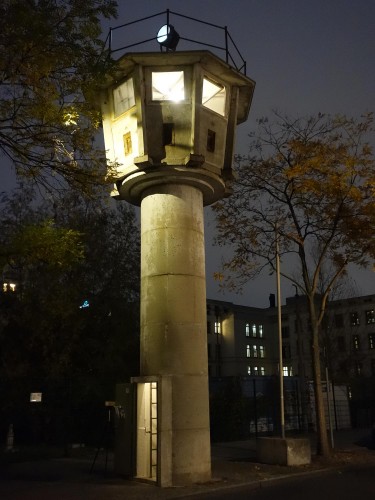 Phase 1, November 2011
Scaffolding is built up around the tower. With the support of Berlin contractors and training workshops, the renovation could begin. Electric and fibre optic cables were laid beneath the street. Other additions included a lighting and electric system, a custom security door, monument-certified concrete restoration, a lightning rod, repair of the tower’s windows and roof, a new roof covering and railing, searchlight installation, and the implementation of a CCTV system.

Phase 2, September 2013
Railing around the exit hatch in the tower pulpit.

Phase 3, Mai 2014
A Kalashnikov AK-47 (demilitarized) is introduced as an exhibit.

Phase 4, Oktober 2014
Graffiti is removed from the cascade, and the inner tower is repainted. Switches and sockets are converted to GDR models utilising bakelite. Further inner construction also took place.